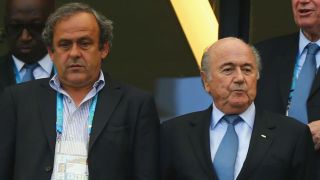 Sepp Blatter and Michel Platini could yet face life bans from all football-related activity after the investigatory chamber of FIFA's ethics committee confirmed it was seeking to increase the eight-year suspensions handed out to the pair.

The original sanction, imposed due to a £1.3million payment made to UEFA president Platini and signed off by Blatter in 2011, was issued by the adjudicatory chamber of FIFA's ethics committee last month, although both men have appealed the verdicts.

Platini has withdrawn from the race to succeed Blatter as FIFA president in February's election in order to defend his name.

Although the investigatory chamber have never disclosed the punishment they were seeking, both Blatter and Platini have confirmed it would prevent them from working in football again.

The case will now go to FIFA's appeal committee who will hear from Blatter, Platini and the investigatory chamber.