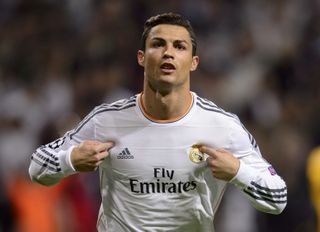 Blatter came under fire from the Portugal international, Real manager Carlo Ancelotti and club president Florentino Perez after he stating a preference for Barcelona attacker Lionel Messi during a speech at the Oxford Union.

The Swiss described Messi as "a good boy that every father, every mother would like to have at home" when asked to compare the two players, who are in contention for the FIFA Ballon d'Or.

Blatter claimed that Ronaldo "has more expenses for the hairdresser", before declaring: "I like both of them, but I prefer Messi."

However, the 77-year-old has now moved to calm the furore, insisting that did not intend to show disrespect to Real or Ronaldo.

"I want to clarify that for me Cristiano Ronaldo is at the same level as Messi and they are both outstanding players, each in their own way," Blatter said in a letter to Perez, posted on the club's official website.

"I'm very sorry that this situation has hurt you (Ronaldo) so much and I apologise for it.

"It was never my intention to embarrass or disrespect Real Madrid CF, or one of their players or their fans."