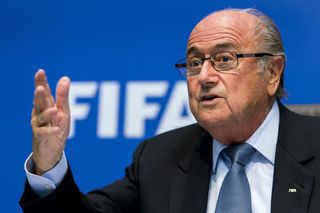 Blatter, who assumed the role of president in 1998, has faced much criticism during his tenure, with the governing body heavily scrutinised for alleged financial mismanagement and corruption.

The Swiss has also come under fire for the decision to award the 2022 FIFA World Cup to Qatar, and his initial refusal to implement goal-line technology in football.

But the 77-year-old feels the portrayal of him in the media - specifically in the United Kingdom - is an unfair one.

Delivering address at Oxford University, Blatter said: ''You ask yourself, `What have I done? Why has it come to this?

"Is FIFA to blame for everything? Are we not just a football organization working for the good of the game? How did it come to this?

"People like a scapegoat, of course, but how could things have become so twisted? As you can see, I am not some overbearing bully who can intimidate my critics with one look and strong arm governments to my will. I am a servant of football. Not a dictator.

"Perhaps you think I am a ruthless parasite sucking the lifeblood out of the world and out of football. The godfather of the FIFA gravy train."

Allegations of financial wrongdoing within FIFA resurfaced following the vote to award the World Cup to Russia (in 2018) and Qatar.

However, Blatter was quick to refute those accusations, insisting that FIFA are only working to improve world football.

"Contrary to what you might have heard, FIFA does not expect host nations to hand over suitcases of cash to FIFA," he explained.

"You might have been led to believe FIFA is the evil Sherriff of Nottingham of football.

"But the truth is we have more in common with Robin Hood. Taking the money we get from our commercial partners and ploughing it back into the grassroots of the game for all to benefit."