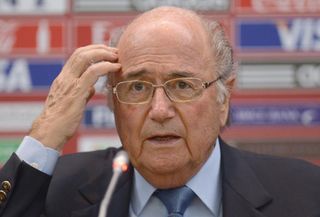 A banana was thrown from the stands as Alves prepared to take a corner during Barca's 3-2 La Liga win over Villarreal at the El Madrigal.

Instead of throwing it away, the Brazil international peeled the fruit and consumed it as he delivered the set-piece.

Alves brushed off the incident after the match, claiming it was better to laugh in the face of such discrimination.

High-profile players all around the world offered support for Alves via Twitter in the aftermath and Blatter has joined them.

"What @DaniAlvesD2 tolerated last night is an outrage," he posted on his official Twitter account on Monday.

"We must fight all forms of discrimination united. (There) Will be zero tolerance at (the) #WorldCup."