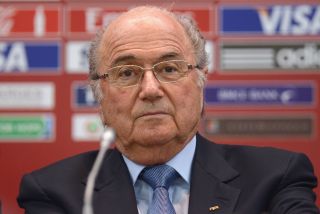 Three of the 12 host stadia failed to meet the December 31 deadline for completion, with the grounds in Coritiba, Sao Paulo and Cuiaba not expected to be handed over to FIFA until mid-April - just six weeks before the tournament kicks off on June 12.

Blatter admitted he had been disappointed by the slow progress in Brazil, branding the South American nation the worst-prepared host nation of a World Cup since he became FIFA president in 1998.

"No country has been so far behind in preparations since I have been at FIFA," he told Swiss newspaper 24 Heures.

"It is the only host nation which has had so much time - seven years - in which to prepare."

The 77-year-old also admitted he expected further protests in Brazil after last year's FIFA Confederations Cup was marred by unrest due to the public funding required to host such tournaments.

"I am an optimist not a pessimist," he added. "So I am not worried.

"But we do know there will again be protests.

"There was no specific goal (during the Confederations Cup) but during the World Cup the protests will perhaps be more concrete, more organised.

"I believe football will be safe, I do not believe that Brazilians will attack the football directly."