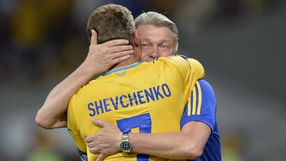 Shevchenko, 35, announced he would retire from international football after co-hosts Ukraine failed to progress from the group stage at Euro 2012. He has scored a record 48 goals for Ukraine, two of which came in their opening 2-1 defeat of Sweden in the tournament.

"I don't think a second Shevchenko will appear soon," Blokhin, once a star Soviet player himself, told reporters in his trademark deadpan style.

"The young lads who play as strikers [in Ukraine] now lack the intuition and skill that Shevchenko has, that I used to have... that [Cristiano] Ronaldo and [Lionel] Messi have and which sets them apart from others.

"This is a big loss for the national team," he added. "And we must think how to play attacking football... we cannot play without strikers like Spain do."

Blokhin said it was up to clubs to produce the talent to fill Shevchenko's void.

"We only take accomplished players," he said.

Shevchenko, regarded as the finest player that post-independence Ukraine has produced, has said he is weighing offers from clubs in the United States and at home.

A product of Dynamo Kiev, he went on to a glittering career at AC Milan and later switched to Chelsea where he had a less successful time.

Ukraine's victory over Sweden in Euro 2012 was their only one of the tournament. They were eliminated from the championship after defeats by France and England.