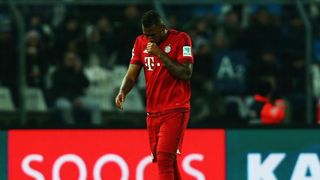 Bayern Munich warmed up for the second half of their Bundesliga title defence with a 2-1 defeat at Karlsruhe as Jerome Boateng was sent off 27 minutes after coming on.

The German champions return to competitive action at Hamburg on Friday eight points clear, but will do so off the back of a frustrating defeat at Wildparkstadion.

Despite naming Arjen Robben, Thomas Muller and Boateng on the bench, Pep Guardiola began with a strong side as he begins his final few months in charge at Bayern.

The Spaniard is to leave the Allianz Arena at the end of the season and saw his side fall behind 16 minutes in when Boubacar Barry capitalised on a Javi Martinez slip before finishing smartly past Manuel Neuer.

The lead lasted just five minutes, however, as Douglas Costa pulled the ball back to Arturo Vidal, who produced a stunning effort to beat Dirk Orlishausen and find the top corner.

Robben was introduced at half-time for his first appearance since injuring a muscle in late November, while Boateng also joined the action at half-time along with Muller.

But, when Boateng was caught flat-footed on the halfway line, the centre-back made a number of attempts to haul down Erwin Hoffer before eventually suceeding and conceding a penalty.

Dimitrij Nazarov stepped up to finish past Neuer with 16 minutes remaining as the 2. Bundesliga side dealt Bayern's preparations a minor blow.