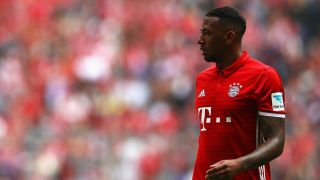 Jeroma Boateng has warned Mats Hummels that he has no intention of giving up his position as Bayern Munich's main man in defence.

Hummels will leave Borussia Dortmund for Bayern at the end of the season to partner up with Boateng at the heart of the Bavarians' backline - just as he does for world champions Germany.

However, Boateng told Kicker: "There does not change a whole lot for me with Mats as my new partner at centre-back.

"My position remains the same. I still see myself as the leader of our defence.

"It does not really matter to me who plays alongside me."

Hummels will play his last game for Dortmund when they take on Bayern in Saturday's DFB-Pokal final and Boateng expects a difficult match for his future club-mate.

"His last game for Dortmund will not be easy for him," Boateng added.

"But he will without a doubt be hugely motivated to say farewell to Dortmund by winning a trophy."