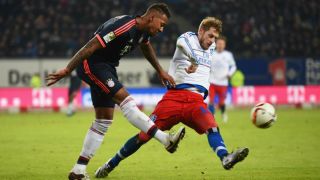 Bayern Munich defender Jerome Boateng will be out of action for a longer period than initially predicted after sustaining an adductor injury in Friday's 2-1 win over Hamburg.

The Germany international picked up the knock after 56 minutes of play and was forced to leave the pitch as a result, with Javi Martinez taking his place.

Bayern announced after the game Boateng had sustained a groin problem and was doubtful for next week's match against Hoffenheim, but further examination on Saturday revealed the 27-year-old will be unavailable longer than expected due to an adductor injury.

"Bayern will have to make do without the services of Jerome Boateng for now," a statement on the Bundesliga leaders' official website reads.

"The centre-back sustained a muscular problem in the adductors of his left leg in the restart of the Bundesliga against Hamburg on Friday and awaits a longer spell on the sidelines, an MRI scan on Saturday has revealed."

Boateng has been a key figure for Bayern this campaign, making 27 appearances in all competitions.