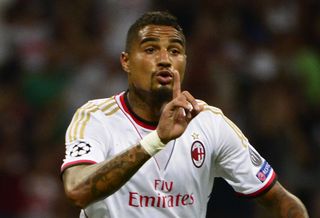 Boateng joined Milan on a permanent basis in 2011 after immediately moving to San Siro on loan in 2010 following his transfer from Portsmouth to Genoa.

The German-born Ghana international scored a double in Wednesday's second leg as Milan secured their place in the group stage of the UEFA Champions League with a 4-1 aggregate win over PSV Eindhoven in the play-off round.

Schalke have made a difficult start to the new season, taking just one point from their opening three Bundesliga games, with striker Klaas-Jan Huntelaar sidelined in the 4-0 defeat to Wolfsburg on August 17.

A statement on the club's official website read: "The Royal Blues are outlining the agreement of Kevin-Prince Boateng. The midfielder of AC Milan is currently undergoing a medical with Schalke."

Boateng is poised to become Schalke's sixth signing of the transfer window after left-back Dennis Aogo joined on loan from Hamburg on Thursday.

Former Tottenham man Boateng - who enjoyed a loan spell with Schalke's local rivals Borussia Dortmund in 2009 - made 100 appearances in his time at Milan, scoring 17 goals. He also had a spell with Hertha Berlin.