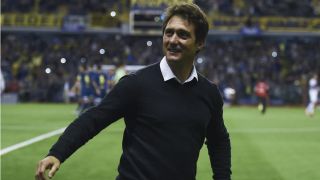 Argentina were eliminated in the last 16 of the World Cup, having lost the previous final and finished as runners-up in the Copa America in 2015 and 2016.

Despite going deep into tournaments prior to their early exit in Russia, the perception is that a national team boasting the likes of Lionel Messi, Sergio Aguero and Angel Di Maria have underachieved.

Boca and River meet on Saturday in the first leg of a continental final that has captured the imagination of fans around the world, and Barros Schelotto believes the clubs have put Argentinian football back on the map.

"Boca and River have put Argentinian football in a place where it has never been before," he told a news conference. "In the past few years, the Argentina national team has been battered, [whether that is] individually or the national team itself because of the results.

"And I think that today Boca and River have come to a place that it is important to highlight.

"Beyond what will happen in the final, today the entire world is talking about this final. It is a very important achievement."

The Superclasico final promises to deliver a fascinating spectacle and Barros Schelotto is expecting a tight affair across the two legs.

"If you analyse finals, like the World Cup final, Copa Libertadores final and Champions League final, it is difficult to find one team that has dominated the other. Maybe it happens after a goal, but the World Cup final is only one match.

"If you review other Libertadores finals, mainly the first legs were much closer. But finals are different, there is no method, opponents differ.

"What we have to do is to analyse the opposition, know that it is a final and give our best to put Boca in the best possible situation."