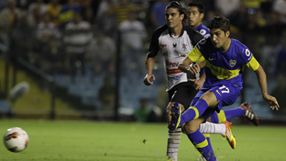 Champions Boca have 21 points from 11 matches but can be overtaken in the Clausura championship standings by Newell's Old Boys, who are one point behind before their match at Arsenal on Monday.

Boca fell behind to a 23rd-minute goal by Matias Gimenez but equalised four minutes after the interval when midfielder Walter Erviti rifled a shot into the roof of the net.

Promoted Belgrano were the team that sent River Plate into relegation for the first time by beating them in a play-off last June.

River were at home to Instituto in a Primera B Nacional top-of-the-table clash on Saturday at the Monumental, packed with a crowd of 55,000.

Defeat would have left River trailing Instituto in second place by seven points but a goal by former France striker David Trezeguet gave them a 1-0 win that leaves them a point behind.

The 34-year-old Trezeguet, rejuvenated since returning to the city where he grew up to play for River, took his tally to eight league goals.

While it was not his most eye-catching goal, scuffing the loose ball into the net from a rebound off the goalkeeper, it was arguably his most important so far.

"I wouldn't change this goal for anything given it's importance [and] what this match meant," Trezeguet told reporters.

"We suffered to win. It was a thrill to see the Monumental packed as it was."

The first division has lost its "Superclasico" derby with River's absence but they and Boca are both on course for the final of the Copa Argentina knockout competition having reached the quarter-finals.