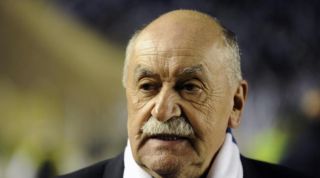 Juanmi Callejon's hat-trick led Bolivar to their huge win in front of their home fans at the Estadio Hernando Siles in La Paz.

They sit four points clear at the top with three matches remaining, but Oriente Petrolero have played one fewer game.

Bolivar dominated Real Potosi and made the perfect start through Carlos Tenorio, who scored a third-minute opener.

Callejon and Tenorio have been dominant in the league this season, having netted 13 and 12 goals respectively to lead the competition.

The Strongest are six points off top spot, but did record a come-from-behind 3-1 victory at Nacional Potosi.

Also on 31 points are San Jose, who were 2-0 winners at home to Wilstermann.

Pablo Salinas' brace led Blooming to a 3-0 victory over Universitario Cobija and Petrolero Yacuiba and Sport Boys played out a 0-0 draw.