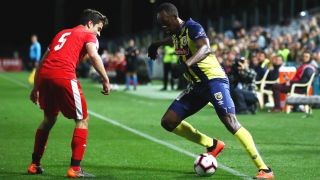 Usain Bolt believes the Central Coast Mariners' friendly on Friday is make or break and will lead to the A-League club deciding his future.

Bolt, 32, is a chance to start for the Mariners against Macarthur South West United as he looks to again stake his claim for a contract.

The Olympic great said it was likely he would know his future based on his performance, with the A-League season starting on October 19.

"This is going to be a big game. I think it will determine if the club makes up its mind on what to do with my career so for me it's a very important game," Bolt told Mariners Media.

"I'm excited and I'm looking forward to proving myself. I'm just going to go out there, push myself and hopefully everything will work out, so that's my focus."

"From a fitness perspective you could probably start him. Whether we do or not... There's probably a good chance."The eyes of the world shift from the Central Coast to Campbelltown on Friday night to see the next step in 's football journey!  October 9, 2018

An eight-time Olympic gold medallist, sprinter Bolt arrived at the Mariners in August.

Bolt, a Manchester United fan, said he had made plenty of progress since arriving in Gosford.

"I think my movements and my touch [have improved]. I think my touch is much better now," he said.

"I've learned how to set my body, where to place the ball, get a ball near my feet. There's a lot of things that I've learnt that I will be applying in the game.