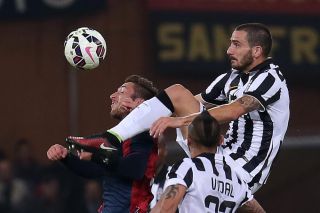 The defending Italian champions saw their unbeaten start to the season come to an end in a 1-0 loss at the Stadio Comunale Luigi Ferraris, thanks to a dramatic 94th-minute winner from Luca Antonini.

Recent floods in Genoa have left their pitch in poor condition, and Juve coach Massimiliano Allegri voiced his concerns ahead of the fixture.

However, centre-back Bonucci believes a lapse in concentration was to blame for Juve's shock loss.

"The pitch was perhaps one of the worst in Serie A, but we can't use this as an excuse," he told Juve's official website.

"We had opportunities but weren't able to make the most of them.

"That's football for you. We put in an excellent display in spite of the difficult playing surface and opponents who didn't give us an inch for 93 and a half minutes.

"Then, perhaps, we allowed our guard to slip a little as we went all out for the winner."

Juve will seek a swift response when they visit lowly Empoli on Saturday.