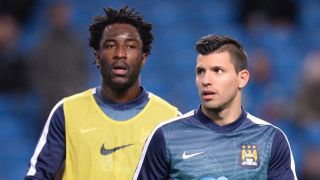 Manchester City striker Wilfried Bony would relish the opportunity to have more game time alongside Sergio Aguero this season.

Bony is a striker in form having scored four goals in his last seven appearances in all competitions.

However, fellow forward Aguero recently returned from a heel injury and, with manager Manuel Pellegrini usually opting to play just one striker, Bony is likely to drop to the bench more regularly.

The Ivory Coast international insists that the duo can be part of the same XI, though, should Pellegrini opt for a change of tactic.

"It's good, he's a different striker. He's a running, faster striker, where as I'm more in the box keeping the ball. I think we could do that but it depends on the coach."

Bony voiced his displeasure at being dropped in favour of the returning Aguero after last month's defeat at Arsenal.

However, the former Swansea City star insists he was not criticising his manager and says every player is disappointed if they are not chosen to start.

"But the coach has to pick 11 players so when we come in we have to give our maximum.

"As a striker when you play and score your confidence is coming back so it's always good but I always say the situation is that the coach has to make a decision.

"Yes you might not be happy about it, but it's good for the team."