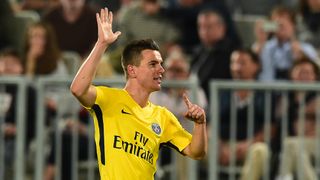 Paris Saint-Germain remain on track to smash Ligue 1 records after a late goal from Giovani Lo Celso earned a battling 1-0 win at Bordeaux on Sunday.

Unai Emery's men, already champions of France, booked a place in the Coupe de France final with a midweek victory over Caen that moved them a step closer to a domestic treble, the Coupe de la Ligue having already been won against Monaco.

Various Ligue 1 landmarks are in reach of PSG after the league's runaway winners eventually found a way to break down a stubborn and resilient Bordeaux at Matmut Atlantique.

Gustavo Poyet's side created a series of fine chances, with Malcom dazzling on the right wing, but Alphonse Areola kept out drives from Lukas Lerager and Martin Braithwaite, as well as a close-range Pablo header.

PSG took until the 76th minute to break the deadlock and notch for a 27th Ligue 1 match in succession, Lo Celso - who hit two goals against Monaco in a title-winning victory last weekend - lashing in a low, left-footed drive after a cross was cleared to the edge of the box.

Emery's side will close the campaign with record totals for points and goals – they have 90 and 104 respectively, with the records standing at 96 and 118 – as long as they enjoy a strong end to what has been a successful season domestically, despite continued disappointment in the Champions League.

Bordeaux made a great start but Younousse Sankhare and Jules Kounde failed to hit the target with strikes from outside the box.

PSG responded to that slow opening to the match and Benoit Costil made a fine save low to his right to tip away Lo Celso's 13th-minute cushioned volley.

Bordeaux had won back-to-back Ligue 1 games and continued to threaten, though, with Malcom and Braithwaite denied by Areola, before Francois Kamano headed a great chance wide.

Kylian Mbappe perhaps should have hit the back of the net in the 43rd minute, but when Lo Celso's cute chip gave the forward a chance he rushed the finish and blasted over.

Cavani was seeking the goal to overtake Zlatan Ibrahimovic as PSG's highest-scoring player in Ligue 1, but when he side-footed home a Javier Pastore cross the offside flag was raised.

Chances continued to flow for the hosts, however, and Malcom ought to have hit the target when the ball came out to him on the edge of the box, the Brazilian winger clearing the crossbar.

Lerager's strike was then beaten away by Areola, who also smothered a shot from Maxime Poundje and had to react brilliantly to parry a header from Pablo.

And all those Areola saves proved to be pivotal, allowing PSG to raid down the other end and snatch all three points, arguably undeservedly.

Bordeaux failed to clear a corner properly and the ball sat up perfectly for Lo Celso to rifle a drive past captain Costil.

Bordeaux threatened to claim the point their performance warranted, but PSG kept them at bay and Yuri Berchiche made a crucial block in the third minute of added time to keep Kounde out.

- PSG have already surpassed their record of goals scored in a Ligue 1 season, with 104. Their previous record was 102 in 2015-16.
- Giovani Lo Celso has scored three goals in his last two games in Ligue 1, after scoring only once in his first 32.
- Alphonse Areola made eight saves against Bordeaux, his best tally in Ligue 1 and the best performance by a PSG goalkeeper in the top flight since Salvatore Sirigu against Saint-Etienne in December 2011 (8).