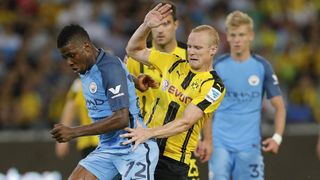 Despite conceding a last-gasp equaliser in a 1-1 draw with Borussia Dortmund, Manchester City were able to celebrate Pep Guardiola's first win in charge thanks to a penalty-shootout success.

It looked as though City would claim the triumph in regulation time when David Silva and Sergio Aguero - off the bench and featuring for the first time since last season - combined for the latter to open the scoring in the 79th minute in China.

But just when it seemed they had done enough for a 1-0 victory, City switched off from a corner in the fifth minute of stoppage time and Christian Pulisic's effort crept its way into the net, through the legs of replacement goalkeeper Angus Gunn.

Although Gunn - the son of former Norwich goalkeeper Bryan Gunn - may feel he could have done better with that goal, the 20-year-old proved the hero in the shootout, saving three times as City prevailed 6-5 after eight kicks apiece.

Raheem Sterling having missed City's seventh effort, Gunn saved from Jacob Bruun Larsen to keep City in it and then again from Mikel Merino after Angelino's successful conversion for the victors.

Likely hindered by the 30-degree temperatures and sluggish pitch, the game was a far cry from the incisive, attacking football the expectant Shenzhen crowd had come to see.

While City had Monday's meeting with Manchester United in Beijing cancelled due to adverse weather, Dortmund had thrashed the same opponents 4-1 last Friday and Guardiola's side started in sloppy fashion here.

Dortmund were almost gifted an opener three times in the first 20 minutes when two errant passes from Willy Caballero and one from Tosin Adarabioyo led to chances for Ousmane Dembele and Emre Mor, but neither man could convert.

While posing a danger to themselves, City continued to look a threat going forward with Kelechi Iheanacho denied by Roman Burki, who effected a stunning point-blank save with his right boot on the stroke of half-time.

Dortmund ought to have gone in front with 15 minutes to play when Marco Hober's sublime reverse ball set up fellow substitute Gonzalo Castro, who prodded straight at Gunn when clean through.

And Thomas Tuchel's side were left to rue that miss shortly afterwards as Aleix Garcia's exquisite pass released Silva inside the area, and the Spaniard selflessly squared for Aguero to complete an easy finish.

Pulisic looked to have saved Dortmund with the final kick, but Gunn's three excellent saves handed Guardiola his first success as City boss.