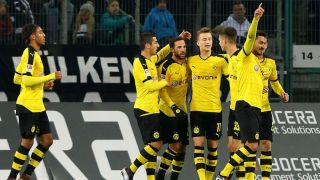 Borussia Dortmund eased back into life in the Bundesliga after the winter break, as goals from Marco Reus, Henrikh Mkhitaryan and Ilkay Gundogan saw off Borussia Monchengladbach 3-1.

A dreadful day in front of goal for Pierre-Emerick Aubameyang did not cost Thomas Tuchel's side as they cut Bayern Munich's lead at the top of the table to eight points at Borussia Park thanks to a typical cutting efficiency on the counter-attack.

Gundogan struck the frame of the goal for Dortmund in the first half, while Andreas Christensen also clipped the crossbar for Gladbach, but the visitors established a comfortable lead either side of half-time thanks to efforts from Reus and Mkhitaryan.

Raffael gave the home team encouragement with his ninth goal in all competitions this season in the 58th minute and Gladbach briefly threatened to stage an unlikely recovery, but Gundogan arrived with 16 minutes remaining to confirm Dortmund's victory.

Gladbach's pre-Christmas recovery from a woeful start to the campaign had lifted them into fourth, a position Schalke or Wolfsburg could snatch from them on Sunday.

The trajectory of the game could have been altered significantly, however, had home defender Christensen not somehow failed to put Gladbach in the sixth minute, as his six-yard header from Raffael's corner grazed the crossbar on its way over.

To set the tone for a rare off-colour outing, Aubameyang scuffed a simple finish from Reus' centre in the ninth minute.

Home goalkeeper Yann Sommer was down quickly at the feet of Aubameyang in the 25th minute after a deflected shot made its way into the path of the Dortmund striker, while Gundogan flashed a stunning 25-yard effort off the crossbar as both teams continued to push hard for the opening goal.

Aubameyang's uncharacteristically sloppy display continued with a miscued attempt from Lukasz Piszczek's pass in the 35th minute but Dortmund were steadily taking full control of the encounter and they edged ahead with four minutes left before the break.

Gundogan's excellent throughball released Reus into the right channel, and the former Gladbach man finished with great composure across Sommer.

Ibrahima Traore almost caught Dortmund cold in the early moments of the second half when left unmarked inside the area, but visiting goalkeeper Roman Burki produced an excellent save to keep his side ahead.

And that save proved to be a crucial one when Mkhitaryan added a second just two minutes later. A savage Dortmund counter-attack began with Mats Hummels breaking up possession inside his own half and feeding Reus, who crossed for the unmarked Belarusian to slide a shot beyond Sommer.

The away side seemed to be in total control but, in the 58th minute, Gladbach had hope. Dortmund failed to make the most of two opportunities to clear from inside their own area and Raffael capitalised, taking one touch before firing left-footed beyond Burki from 12 yards out.

Aubemayang fluffed a third golden chance in the 73rd minute, skewing his shot horribly wide when one-on-one with Sommer.

But Gundogan made amends for his team-mate's mistake less than three minutes later as the midfielder tucked home Mkhitaryan's cross for Dortmund's 50th goal and 13th victory of the Bundesliga campaign.