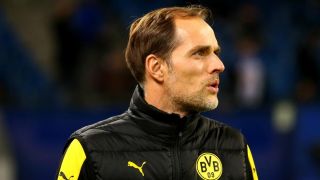 Thomas Tuchel wants Borussia Dortmund to build on their fine performances before the winter break when they take on Borussia Monchengladbach on Saturday.

BVB sit second in the table ahead of the Bundesliga restart with 38 points from 17 games, trailing leaders Bayern Munich by eight points, while they hold a six-point advantage over third-placed Hertha Berlin.

Tuchel's men impressed in the first half of the season with their free-flowing attacking football, netting more goals than any other team (47), and the former Mainz coach hopes for more of the same in the remainder of the 2015-16 campaign.

"I hope that we can keep pushing our boundaries in the second half of the season," Tuchel told the official Bundesliga site.

"That means carrying on as we are and staying strong as a group.

"It may sound unbelievable, but I don't know how far ahead we are of third place. I know how far behind the leaders we are, because people always talk to me about it.

"We need to just keep going and value every single day. There is a lot of hard work ahead, but if we finish the season the way we started it, we can be very happy going into the summer."

Dortmund have reason for optimism heading into Saturday's encounter at Borussia Park, having not lost their first game after the winter break for 11 years (winning seven and drawing four).

Additionally, they hold the better head to head record in games against Gladbach, although only slightly so. BVB have emerged victorious on 30 occasions, drawn 29 times and been on the losing side on 28 occasions.

Tuchel's men recorded a 4-0 win over Gladbach on matchday one, with Marco Reus, Pierre Emeric Aubameyang and Henrikh Mkhitaryan (twice) on target back in August.

Monchengladbach lost their opening five league fixtures but have since recorded a string of fine results. In fact, only Bayern (31) have picked up more points than Gladbach since Andre Schubert took over after matchday five (29). That good run of form has seen them climb to fourth place in the table with 29 points from their 17 encounters.

Schubert will have to make do without captain Granit Xhaka on Saturday through suspension. The Switzerland international has now been sent off three times this season and is the youngest player to see red on five occasions in the Bundesliga.

- Monchenglabach have scored 32 goals under Andre Schubert, more than any other Bundesliga side in that timeframe.
- Marco Reus used to play for BMG, contributing to 56 goals in 97 Bundesliga appearances for the Foals between 2009 and 2012.
- Gladbach have not lost a home game on Saturday evening since February 2011 (3-2 to VfB, otherwise W6, D3).
- Borussia Dortmund picked up 23 points more under Tuchel in the first half of 2015-16 than under Jurgen Klopp last term (38 v 15).
- Top scorer Pierre-Emerick Aubameyang (18) has scored more than Ingolstadt (11), Hoffenheim, Werder Bremen and Darmstadt (17 each).