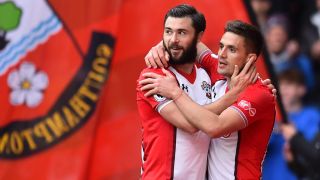 Dusan Tadic labelled Southampton's 2-1 victory over Bournemouth as "one of the most important wins in our history" as the Saints breathed fresh life into their Premier League survival bid.

The Serbia international struck in each half at St Mary's to render Josh King's goal inconsequential, as Mark Hughes' men closed on 17th-place Swansea City with a first home league win since November.

And Tadic, who took his league tally for the season to six, did not downplay the significance of the result.

"I think this is one of the most important wins in our history because we are fighting for our lives and I think we showed that," the attacking midfielder told BBC Sport.

"We showed we are able to win when we play like that. We knew we had to win this game, no matter how we played. We just had to win and I hope we can do that again in our last three games."

The Saints' victory was their first in the Premier League since defeating West Brom in February, while they suffered a damaging defeat earlier this month after throwing away a two-goal lead to lose to Chelsea.

"It is disappointing when you are 1-0 or 2-0 up and then you lose the game, but we showed we had to forget these things," Tadic added, referencing the defeat against the Blues.

"The new coach gave us extra power and experience and finally we gave him something back. We need to be at our best when it is the most difficult."