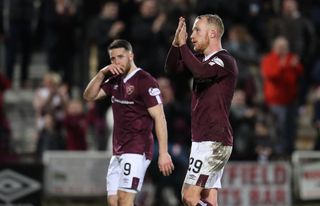 Hearts striker Liam Boyce has recovered from illness and a back problem as he looks to repeat his recent match-winning performance against Rangers in the William Hill Scottish Cup quarter-final.

Toby Sibbick remains on the sidelines with illness.

Jermain Defoe has an outside chance of making the Rangers squad.

The veteran striker is on his way back from a calf injury which has kept him out since the end of January.

Florian Kamberi, on loan from Hibernian, is cup-tied but fellow striker Alfredo Morelos returns from suspension.