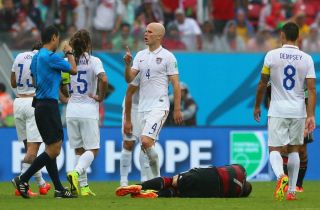 United States coach Klinsmann recently hit out at Bradley and Seattle Sounders striker Clint Dempsey in particular, for choosing to ply their trade on home soil ahead of pursuing a spot at a European club.

Klinsmann said it was hard for the pair to "keep their level" after switching to the MLS, causing league commissioner Don Garber and Orlando City president Phil Rawlins to rebuke the comments.

But Bradley, a veteran of 90 caps for the USA, said he was unflustered by the war of words.

"I don't pay much attention to it, to be honest," Bradley said.

"I have thick skin and I have always had the mentality that as a professional you have to have such a commitment and concentration and determination in who you are and what you're all about that you're not willing to let anybody put you off that."

Bradley insisted his role at Toronto was just as worthwhile as a spot in a European squad, as he was happy to be back in North America.

"As a player it's always the same," he added.

"You want to be at a place where you're valued as a player, as a person, in terms of what you bring to the table every day.

"There's no doubt that now the opportunity to compete and play every day and step on the field each weekend, knowing that you have a big role to play, that that allows guys to improve."

Bradley hinted the suggestion he had come back to the MLS as the end of his challenges in football could spur him to new heights.

"My record when I've played for the national team and my commitment and contribution is there for anybody to look at and take from it what they want," Bradley said.

"But not only has that never stopped me, it continues to motivate me and fuel me even more."

Bradley's club coach Greg Vanney, a former US international, also slammed Klinsmann for his comments, claiming the MLS offers a different type of challenge to the higher-profile European leagues.

"It's challenging for those players to come back and have to be leaders," Vanney said.

"That's not easy. You don't have to do that on a European team when you have guys around you that all have a different level.

"This league challenges different things that you learn and you grow from, and you can still get better as a player and be sharp for the big games."