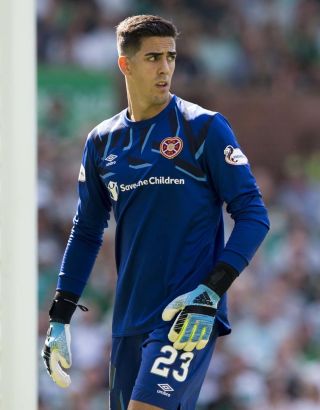 Goalkeepers Laurentiu Branescu and Joel Pereira apologised to their respective managers for their errors after Kilmarnock’s thrilling 3-2 win at Hearts.

However, Brophy’s effort in the opening stages of the second half – which ultimately proved to be the winner – appeared to be straight at Hearts keeper Pereira, prompting the on-loan Manchester United player to accept responsibility in the aftermath.

Hearts head coach Daniel Stendel said: “Should he have done better? Yes. He apologised in the changing room, but it was not his fault that we lost the game.

“We know that he can save that shot – but as a team we must do better in a lot of situations.

“It is disappointing we came from half-time with motivation and conceded a goal like that.

“It is hard for me to explain what happened tonight. To concede three goals against Kilmarnock is not what we expected.”

Nevertheless, Hearts were afforded a way back into the game in the 79th minute when Killie number one Branescu hauled down Conor Washington, allowing Sean Clare to confidently slot home his penalty kick.

The 24-year-old, who is on loan from Italian giants Juventus, then petulantly hurled the ball away as Clare sought to collect it and received a second yellow card in the space of 60 seconds from referee David Munro.

With Killie suddenly under the cosh, Craig Halkett found the net to ensure a nervous finale at Tynecastle.

And Dyer said: “Laurentiu came in and apologised and the lads gave him a round of applause for doing so. It’s football, it happens and we move on.

“We caused our own problems at the end. The game was won, we were in full control. But a couple of mistakes at the end – the keeper getting sent off – put us under pressure.

“The main thing is we got the three points and we came through in the end.”