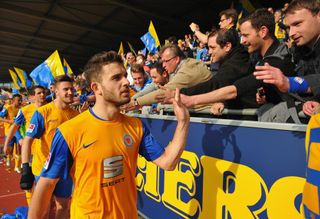 Despite the win, Braunschweig remain bottom of the Bundesliga with five games remaining but did move to within two points of safety as they stunned their more-fancied local rivals.

Lieberknecht's side, who were promoted to Germany's top tier after finishing second in the 2. Bundesliga last season, have struggled throughout their campaign but just one loss in their past seven matches has given Braunschweig some hope of avoiding relegation.

"We're still in a relegation spot but we'll keep at it," Lieberknecht said.

"We're as stubborn as barnacles."

The match was the first time Braunschweig had hosted Hannover in the Bundesliga since 1975 and the home side reacted like they had won the title after the final whistle, climbing the fence behind the goal to celebrate with the fans.

"The fans were sensational, they supported us so well and the atmosphere was incredible," Braunschweig defender Ken Reichel said.

"We all had goosebumps before the match. It was a lot of fun out there today and we definitely deserved to win it."

Hannover travelled just under 70 kilometres east to take on Braunschweig having lost their previous three games and were welcomed by a stadium packed full of supporters in yellow and blue, desperate for victory.

The hosts started brilliantly with Dominick Kumbela scoring in the 14th minute from close range and Braunschweig's early dominance led to a second goal just seven minutes later when Havard Nielsen thrashed the ball home from the edge of the area.

Hannover's chances of a comeback suffered a serious blow just after the hour mark when Andre Hoffman was shown a straight red card for lashing out at Braunschweig's Mirko Boland and the home side completed their victory in the 89th minute thanks to Jan Hochscheidt's cool finish.

"It was a brilliant day for us and I was really happy with my performance," Nielsen said.

"We're in a really good vein of form and we hope to keep it going."

The win was Braunschweig's second in three games and took Lieberknecht's side to 25 points, one behind second-last Nuremburg, while Hamburg and Stuttgart are both on 27 with the latter just outside the drop zone.