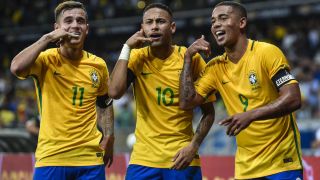 Neymar scored a milestone goal as Brazil piled the pressure on Argentina in World Cup qualifying with a 3-0 win on Thursday.

The Barcelona star netted his 50th international goal, to go with efforts from Philippe Coutinho and Paulinho, in the comfortable win.

The result heaps the pressure on Argentina, whose winless run in qualifying extended to four matches.

Edgardo Bauza's men rarely threatened despite the return of Lionel Messi, who was well contained by Tite's Brazil.

It means under Tite, Brazil – who are top of CONMEBOL qualifying – have won five out of five.

Coutinho struck with a stunner and Neymar scored just before the break to have Brazil in control, with Paulinho putting the Superclasico to bed just prior to the hour-mark.

They returned to Belo Horizonte for the first time since their embarrassing 7-1 loss to Germany in the 2014 World Cup semi-final and Tite started attacking stars Neymar, Gabriel Jesus and Coutinho.

Messi made his Argentina return, while Sergio Aguero was left on the bench with Enzo Perez preferred in the XI.

Both teams started cautiously and it made for a scrappy start at the Estadio Governador Magalhaes Pinto.

Renato Augusto fired well over from 25 yards in the 22nd minute before Lucas Biglia forced a decent save out of Alisson.

Coutinho brought the game to life with the opener.

The Liverpool star cut in from the left before firing a powerful 20-yard effort past a helpless Sergio Romero in the 25th minute.

After beating several markers down the right, he opted to shoot from a tight angle – but his effort hit the outside of the post.

The visitors looked otherwise comfortable without creating clear-cut chances, but Brazil would take a 2-0 lead into the break thanks to Neymar.

Jesus played a superb pass to put Neymar through and the forward made no mistake in a one-on-one with Romero, netting his 50th international goal.

While Paulinho had an effort cleared off the line by Pablo Zabaleta early in the second half, the midfielder would make it 3-0.

A Marcelo cross went uncleared, allowing Augusto to square from the right for Paulinho to strike.

Brazil had chances to add to their three-goal lead as they cruised to a comfortable win ahead of a trip to Peru, while Argentina desperately need a win when they host Colombia on Tuesday.