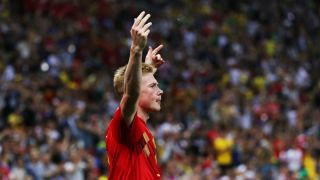 Brazil had no idea how to contend with Belgium's ferocity on the counter during the first half of the Red Devils' "really beautiful" 2-1 World Cup quarter-final win, according to Kevin De Bruyne.

Belgium went into half-time 2-0 up thanks to a Fernandinho own goal and De Bruyne's fierce strike, giving a Brazil side previously seen as World Cup favourites a mountain to climb.

Both goals came as the result of swift counter-attacks – De Bruyne's finish applied after a brilliant run and pass from Romelu Lukaku.

"I think we switched things up tactically," Man of the Match De Bruyne told reporters at the Kazan Arena.

"Romelu [Lukaku] and Eden [Hazard] changed position they tried to create many opportunities with Marcelo on the flank.

"I think in the first half we played very well, generated a lot of opportunities and they didn't really know what they had to do.

"In the second half they changed tactically and Brazil were better, but even then we managed to create opportunities."

Up next for Belgium in the last four is Didier Deschamps' France, and De Bruyne is ready to grasp a rare opportunity for his country.

"[France] are an extraordinary team, but I think whenever you reach the semi-finals of the World Cup you are never going to face weak opposition," De Bruyne said.

"All the teams involved know how to play football. We're on an equal footing with France, the difference is minimal.

"We've achieved something really beautiful and it's not easy as you have 10 to 15 teams coming here to win.

"Of course we are proud to reach the semi-finals and we are going to do our utmost to win that match against France.

"We're in the last four and we're happy, but you want to go to the final and play in the match the whole world will be watching and you want to do all you can to get there.

"Only a few times in a lifetime you might get to go to tournaments and we'll do all we can to be ready and hopefully we can give some nice images of Belgium, that's why we're here and we're going to give everything we can to win that game against France."