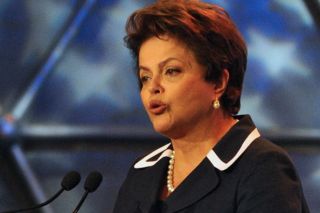 Rouseff was speaking at the opening of the Arena das Dunas in the capital Brasilia, the seventh of 12 stadiums to be officially opened for Brazil 2014.

Despite reported issues with the stadium in Curitiba, Rouseff was adamant that everything will be ready for the June tournament.

"This country is the country of football - we are never not in the World Cup," Rouseff said.

"I'm sure that the Brazilian people are going to show, besides this passion, an immense capability to receive visitors.

"I believe that everyone, the governor, the mayor, and the business people that are responsible for the Curitiba stadium are going to make the stadium ready in time for the deadline.

'It's something that I'm sure of and I think that Brazil has to bet in favour of it being ready and not against it."

Curitiba is set to host four games in 10 days including World Cup holders Spain's match against Austalia and Russia versus Algeria.