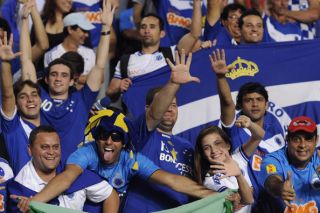 An 18th-minute goal from Borges saw league leaders Cruzeiro to a 1-0 win at home to Fluminense, who finished the encounter with nine men.

Marcelo Oliveira's men had lost consecutive games but broke that run to stay 10 points clear at the top with nine league matches remaining.

Cruzeiro were without a goal in their past two matches before Borges struck, scuffing a shot into the bottom corner after Ricardo Goulart's run led to his chance – much to the delight of the home fans.

The visitors were reduced to nine men in the final 13 minutes with Rafael Sobis and Felipe sent off.

Gremio remain second after a 1-0 win over Corinthians, which came courtesy of Hernan Barcos' 50th-minute goal.

Third-placed Atletico Paranaense were also 1-0 victors as Roger scored an 85th-minute winner against an Atletico Mineiro side who finished the contest with nine men.

Vasco da Gama's struggles in the relegation zone continued as they were beaten 2-0 by Goias, who had Rodrigo and Hugo score either side of half-time.

Like Vasco, Criciuma failed to take advantage as they suffered a 3-1 loss at home to 11th-placed Portuguesa.

Gilberto, Bergson and Henrique were on the scoresheet for the visitors after Matheus Ferraz had given the hosts some hope with his 71st-minute goal.

Nautico are anchored to the bottom of the table – a distant 17 points from safety – and slumped to a 3-0 loss at Sao Paulo.

Elsewhere, Santos and Internacional played out a goalless draw and Flamengo pushed Bahia closer to the bottom four with a 2-1 win.