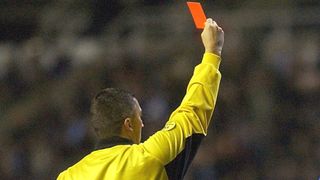 A Brazilian derby between Vitoria and Bahia was forced to be abandoned after the home side were reduced to six men in a match marred by a glut of red cards and an ugly melee.

Seven reds were shown to on-field players – five from hosts Vitoria and two from Bahia – after a mass brawl broke out in the state championship clash at Estadio Manoel Barradas in Salvador on Sunday.

At least two Bahia substitutes were also dismissed to take the tally of reds in the match to an astonishing nine, although some reports suggest that as many as 10 were handed their marching orders.

The referee ended the game well before the full-time whistle with the scores tied at 1-1 as Vitoria were reduced to six men and teams require at least seven players on the field per FIFA rules.

Denilson had opened the scoring for Vitoria in the 34th minute before Vinicius equalised after converting a penalty five minutes into the second half.

And that is when tempers overflowed – Vinicius provocatively celebrating his leveller as Vitoria took offence, with goalkeeper Fernando Miguel immediately confronting the Bahia player.

Punches were thrown, leading to three red cards for Vitoria and two for Bahia. The game did restart, but Uillian Correa was later dismissed for the hosts, before Bruno Bispo also received a second yellow and consequent red for kicking the ball away, leading to the premature end to the game.

Bahia stated on their official website that a decision on the final result will be made at a later time, although according to competition rules they will be considered 3-0 winners.