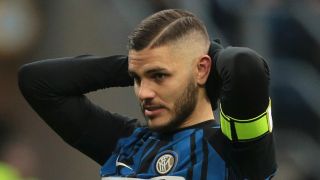 Mauro Icardi has not made Argentina's final 23-man squad for the World Cup but Juventus star Paulo Dybala is in.

Icardi and Dybala were omitted from Jorge Sampaoli's selection for the March friendlies against Italy and Spain, with the Argentina boss suggesting both were in danger of missing out on Russia 2018 after failing to impress on previous call-ups.

Sampaoli's provisional 35-man group offered hope earlier this month but Icardi's 29 goals in 34 Serie A appearances this season – including five in his past six matches – did not amount to a persuasive enough case.

Dybala is included alongside Juve team-mate Gonzalo Higuain, while Sergio Aguero provides another enviable option up front as the Manchester City striker continues his rehabilitation from minor knee surgery.

A further alternative alongside captain Lionel Messi in attack is Boca Juniors youngster Cristian Pavon, although there is no room for either of Roma's Diego Perotti or Racing's reported Inter target Lautaro Martinez.

There are relatively few surprises elsewhere, with Independiente midfielder Maximiliano Meza getting the nod despite making his only senior international appearance to date in the 6-1 defeat to Spain last time out.

Sampaoli's men have been drawn in a potentially tricky Group D alongside Iceland, Croatia and Nigeria.