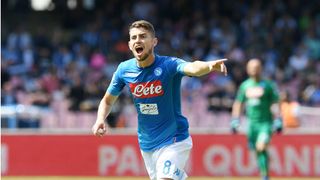 Jorginho has picked Chelsea over Manchester City, with his move to Stamford Bridge from Napoli confirmed in the wake of Maurizio Sarri's appointment as head coach on Saturday.

The midfielder was said to be close to finalising a move to City, but Napoli president Aurelio De Laurentiis suggested the player preferred a move to London, despite the Italian club accepting a bid from the Premier League champions.

Chelsea have now won the battle to sign the Italy international, who has agreed terms on a five-year deal to be reunited with Sarri at Stamford Bridge.

"I am absolutely ecstatic to be here at Chelsea. It is not easy to become part of such a big team so I am very, very happy," Jorginho said.

"I am excited to play in such an intense league, for a team that gives everything to play and win."