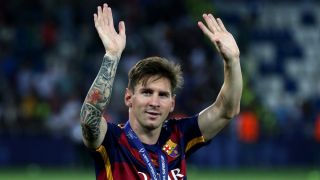 Barcelona and Argentina star Lionel Messi was crowned the winner of the 2015 Ballon d'Or at Monday's ceremony in Zurich.

The 28-year-old beat Real Madrid's Cristiano Ronaldo and Barca team-mate Neymar to the game's most prestigious individual award, winning it for a record fifth time in his spectacular career.

Messi was the hot favourite for the accolade voted for by international captains, coaches and a selection of media representatives from around the world having helped Barca to an historic treble of La Liga, the Copa del Rey and the Champions League in a 2014-15 season in which he netted 58 goals in all competitions.

The start of the forward's 2015-16 campaign was disrupted by a knee injury, but he returned in time to help Luis Enrique's men win the FIFA Club World Cup, scoring in the final against River Plate in December.

At international level, Messi captained Argentina to the Copa America final, where they were beaten by hosts Chile on penalties one year after losing out in the World Cup final to Germany.

Messi's five award wins puts him well clear at the top of the list of Ballon d'Or victors. No other player has won more than three titles, an accomplishment that has been achieved by Johan Cruyff, Michel Platini, Cristiano Ronaldo and Marco van Basten.

The Argentine's victory ends a run of two consecutive wins for Ronaldo in 2013 and 2014. The two El Clasico rivals have won the last eight awards between them since Kaka's triumph in 2007.