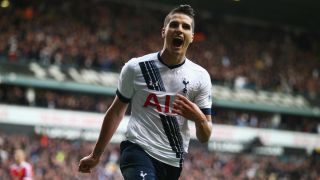 Erik Lamela has followed fellow Tottenham forward Son Heung-min in signing a new contract, committing his future to the club to 2022.

Son agreed a five-year deal earlier on Friday and Lamela has also agreed to extend his time at Tottenham by signing fresh terms.

Although his career has been disrupted by injury in recent years, Lamela made 25 Premier League appearances last term as Spurs qualified for the Champions League again.

And although Tottenham are yet to make any new signings ahead of the 2018-19 campaign, new contracts for Son and Lamela are a positive boost for manager Mauricio Pochettino.

We are delighted to announce that has signed a new contract with the Club, which will run until 2022.July 20, 2018