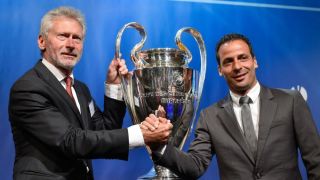 After Bayern Munich were paired with Barcelona in the last four of the UEFA Champions League, Paul Breitner is aware that the Bundesliga champions are in for a difficult test.

The semi-final tie sees Bayern coach Pep Guardiola return to his former club, with whom he won this competition twice as a coach and once as a player.

Bayern put in a devastating display in the quarter-final second leg, hammering Porto 6-1 to overcome a first-leg 3-1 deficit and reach the last four for the fourth season in succession.

Barca, meanwhile, swept aside Paris Saint-Germain 5-1 on aggregate as, like Bayern, they continue their quest for a domestic and European treble.

"It will be very tough to reach the final," said former Bayern defender Breitner.

"We will have to be at full strength in both matches to beat Barcelona."