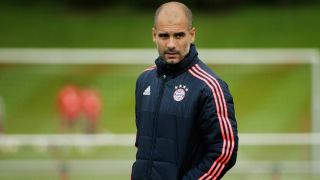 Former Bayern Munich midfielder Paul Breitner wants Pep Guardiola to continue as coach of the Bundesliga champions, but he does not want to pressure the Spaniard into a decision.

Guardiola is out of contract at the end of the season and the two-time Bundesliga-winning coach has been tipped to join Manchester City in 2016-17.

The 44-year-old is a wanted man in Munich, however, Breitner - who won five league titles with Bayern as well as the European Cup in two different spells - told Omnisport: "The only one who decides about his future is Pep Guardiola. Not the media or the fans.

"We need to calm down and we really shouldn't put Pep under pressure that he makes a decision.

"I would really like it if Pep Guardiola stays at Bayern Munchen. I say that as a fan and Karl-Heinz Rummenigge wants that too. I know that. But only Pep Guardiola can decide that."

Reports linking Guardiola with a move to City have seen Carlo Ancelotti emerge a possible replacement in Munich.

The former Real Madrid coach is on a year-long sabbatical after being let go by the Spanish giants.

Breitner added: "I don't know anything about another coach.

"I don't care about Carlo Ancelotti or any other coach in the world."