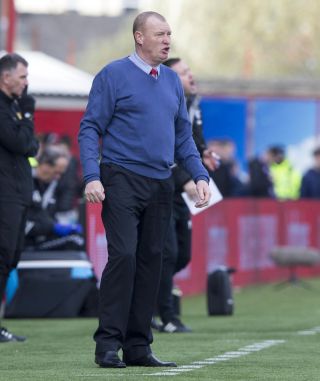 Brian Rice wants Hamilton to be a magnet for young footballers in Scotland.

Accies had seven academy graduates in their squad of 18 on Saturday for the 2-0 home win over St Johnstone which secured their Ladbrokes Premiership status for a record sixth season.

The Lanarkshire side started the last day of the campaign one point ahead of second-bottom St Mirren and goals from defender Ziggy Gordon and attacker Steve Davies ensured the Buddies’ 3-2 win at already-relegated Dundee was irrelevant.

Rice told AcciesTV about his hope for next season and beyond, saying: “We are renowned throughout Britain for producing players and improving players and selling them.

“I needed good experience as well to supplement that and it is a two-way thing.

“I will be working very hard trying to recruit over the summer.”

Rice is pleased to have ensured safety while St Mirren, from whom he left his post as assistant in January to take over at Hamilton from Martin Canning, face Dundee United in the first leg of their relegation play-off at Tannadice on Thursday night before the return match in Paisley on Sunday.

He said: “It is a massive achievement for us.

“I came in here and carried on the good work that Martin Canning had been doing.

“The result is difficult to put into words. The players have done the job. I just pick them and put them on the pitch, they are the ones that perform.

“I am just delighted for everyone at the club. We had a job to do and we have done it so we start planning ahead right away.”