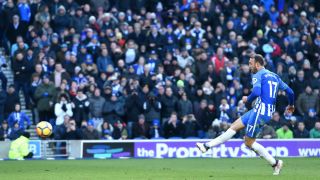 Chris Hughton's men, who had won just one of their previous eight in the Premier League, were in charge for almost the entire match, with the excellent Murray dominating and leading the way in an imperious performance.

There was little sign of Swansea's recent resurgence early on, and Brighton took full advantage as the impressive Murray won and converted a penalty.

Swansea showed hints of improvement on occasion, though they rarely looked like enjoying a prolonged period in the ascendancy and Murray doubled his tally 21 minutes from time, applying the finish after fine play by Jose Izquierdo to give the Swans a mountain to climb.

And any hope of a late Swansea comeback appeared over 17 minutes from time with a lovely Anthony Knockaert goal, but there was a glimmer of hope.

However, Lewis Dunk's own goal only proved to be a mere consolation as Brighton restored their advantage as Jurgen Locadia wrapped up a huge win in the battle to avoid the drop.

FT: Albion secure a massive win against in the . Murray's brace and Knockaert's finish made it comfortable. Dunk's unfortunate own goal gave the visitors hope, but Locadia fired home on his league debut to wrap things up. 4 1 February 24, 2018

Swansea had difficulty coping with Brighton's relentless attacking right from the start, with the home side beginning with plenty of purpose.

Their pressure paid off in the 18th minute, as Murray confidently struck a penalty past Lukasz Fabianski after Mike van der Hoorn had clumsily tripped the striker.

Brighton nearly added a second late in the half, seeing Shane Duffy's header come back off the crossbar at a corner.

And the visitors went close to taking advantage of that let-off, but Jordan Ayew's 18-yard effort came back off the left-hand post on the stroke of half-time.

Although Brighton looked to remain in charge at the start of the second, only a spectacular Ryan save denied Ki in the 52nd minute, as the Australian got down to keep the strike out of the bottom-left corner.

But the home side stepped things up a notch once again and deservedly doubled their lead in the 69th minute - the lively Izquierdo doing well down the left and pulling the ball back to set up an easy finish for Murray.

And a third followed soon after, as Knockaert produced a clever finish to beat the helpless Fabianski after an inch-perfect through pass courtesy of Pascal Gross.

Fortune smiled on Swansea late on when Tammy Abraham's long-range strike took a huge deflection off Dunk on its way past Ryan, but Locadia restored the three-goal lead at the end, tapping in from close range on his Premier League debut.

4 - Lewis Dunk has scored four own goals in the Premier League this term - the joint-most by a player in a single season in the competition's history (also Martin Skrtel in 2013-14). OopsFebruary 24, 2018

- Brighton scored four goals in a game for the first-time ever in the Premier League and the first time in the league since February 2017 (4-1 v Burton Albion).
- Swansea suffered their first defeat in their last six top-flight games (W3 D2), conceding one goal more against Brighton than in their previous five games combined.
- Glenn Murray has netted four goals in his last four Premier League games, as many as in his previous 15 in the competition.
- Only three Englishmen have scored more Premier League goals this season than Glenn Murray (10) – Harry Kane, Raheem Sterling and Jamie Vardy.