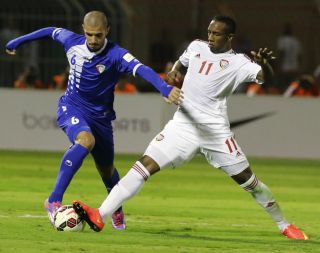 A disagreement over recording the friendly at Cbus Super Stadium in Gold Coast led to UAE calling the game off before Kuwait were pictured being escorted from the stadium by security.

But the UAE Football Association (UAEFA) insisted the incident will not tarnish the "brotherly links" between the two West Asian countries ahead of the Asian Cup, which starts on Friday with Kuwait taking on hosts Australia in Melbourne.

UAEFA board member Saeed Al Tenaiji said: "Such differences happen and we wish the 'Blues' [Kuwait] all the best of luck during the upcoming AFC Asian Cup commitment and to live up to the ambitions of their fans."

Saturday's game was called off after Kuwait demanded that they be allowed to record the friendly.

UAE claim it had already been agreed that the game would not be recorded, broadcast, or open to the media and public.

Kuwait coach Nabil Maaloul refused to play the game and decided to hold a training session but his UAE counterpart Mahdi Ali asked stadium staff to remove the other team from the field, so his side could train.

The match in Queensland had been only the second friendly organised for Ali's side before their Asian Cup opener against Qatar in Group C.

But Al Tenaiji dismissed concerns UAE will be hindered by the cancelled match after they reached the semi-finals in the 2014 Gulf Cup and defeated Jordan in a friendly last month.

"We are optimistic in the light of the splendid performance during the recent [Gulf Cup] and the successful test against Jordan," he said.

"Our opening clash against Qatar is very crucial for our campaign and hopefully the boys would be ready to reach to the highest point in the competition."