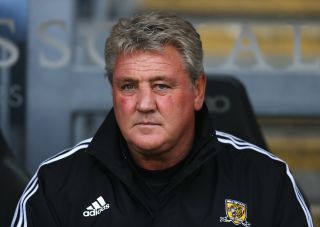 The visitors looked to be on their way to only a second away league win of the season when on-loan Sunderland striker Danny Graham scored his first goal since leaving Swansea in January after nine minutes.

However, Swansea levelled in controversial fashion through Chico Flores, who appeared to turn Jonjo Shelvey's free-kick into the net with his arm on the hour mark,

Hull were also denied a spot-kick in the second half when Swansea's Dwight Tiendalli looked to have handled in the area..

Bruce bemoaned his side's lack of fortune, but accepted that it would have been difficult to disallow Flores' effort.

"I can understand that (the Flores goal) because nobody in the ground can spot that. I've got no grievances there," Bruce told Sky Sports.

The 52-year-old was highly critical of referee Chris Foy's decision not to award his side a penalty.

"He (Tiendalli) has practically caught the thing," Bruce added.

"That is a big call, a big decision. For me, that is a clear-cut penalty."

Bruce was able to take comfort from Graham's opening goal, which he hopes will spark a productive run for the 28-year-old.

"I'm pleased for him (Graham) because all strikers go through a time in their career (where they don't score goals)," Bruce explained.

"The one thing you have to do then is keep work and keep persevering. Let's hope he can go on and get us a few more."