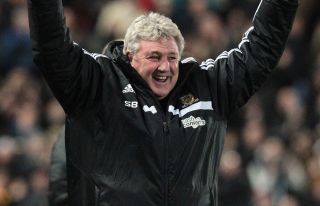 The Premier League side were on the verge of exiting the competition to their Championship hosts after Leonardo Ulloa's first-half goal in the fifth round tie.

But Yannick Sagbo, making the most of a rare start in the absence of the cup-tied Shane Long and Nikica Jelavic, equalised with five minutes to spare.

David Meyler had a header cleared off the line in stoppage time, while Robert Koren also went close as Hull – who hit the crossbar through Sagbo and Curtis Davies during the first half – finished well.

When asked for his thoughts on the result, Bruce told BT Sport: "Well, we're still in it.

"And we showed what they've always showed in the 18 months I've been here. We didn't play well in patches of the game but we got something.

"In the end, we could have nicked it. We had two really great chances at the death.

"It's always difficult coming here and they're a good footballing side.

"Thankfully we've responded. It's difficult with replays and all the rest of it but we're still there. We've got a chance."

Hull will host Sunderland in the last eight if they can defeat Brighton in front of their home fans in the replay.

And Bruce said his charges were too deep in the competition to contemplate not playing a full-strength side for the visit of Brighton on February 24.

"We've got this far now…we've got a quarter-final (on offer) in the FA Cup now," he added.

"We have got to give it a good shot. Let's go and give it a crack."