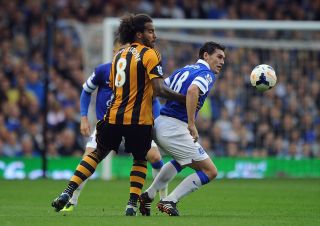 Barry was shown a yellow card as a result of the tackle on winger Aluko in the first half, but Bruce was in no doubt the on-loan midfielder should have been dismissed by referee Neil Swarbrick.

Hull striker Danny Graham had already been withdrawn due to an injury sustained as a result of a challenge from former England midfielder Barry as Everton went on to secure a 2-1 win.

Steven Pienaar scored the winner for the home side almost immediately after coming off the bench. Yannick Sagbo had equalised for the visitors after Kevin Mirallas opened the scoring for Roberto Martinez's side.

As well as being stunned that Barry had not seen red, Bruce was aggrieved that the opening goal was allowed to stand as he felt Barry got a touch on Mirallas' shot when standing in an offside position.

The former Sunderland boss said: "There’s nobody who is a bigger admirer than I am of Gareth Barry, he’s been a really great player over the years.

"He's nudged the first one and changed the course of the ball, standing a yard offside.

"But the challenge on Aluko is horrific, absolutely horrific and the referee is only standing 10 or 15 yards away.

"It’s bad enough the challenge on Danny Graham, but when you see the one on Aluko it’s stuff of horror stuff and they, in my opinion, are the big decisions that cost you the game.

"Danny has a knee injury, we’re not sure how it is. That challenge is worthy of a yellow card, but the challenge on Aluko is horrific.

"It’s over the top of the ball and just below his knee. It’s a horror challenge. The big decisions have gone against us and particularly the goal, the linesman has got to flag there."

Victory for Everton saw them move to up fifth place, while Hull occupy ninth spot.