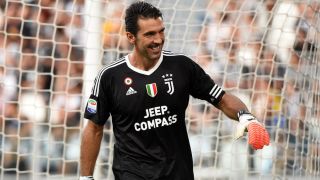 Gianluigi Buffon is "an alien" and one of the greatest goalkeepers of all time, according to Alvaro Morata.

Morata is set to face his former Juventus team-mate on Saturday when Spain host Italy in World Cup qualifying.

The Chelsea forward spent two seasons with Buffon at Juve and said the 39-year-old and Iker Casillas were the best shot-stoppers of all time.

"He and Casillas for me have been the two best goalkeepers in history. It's hard to repeat two guys like that.

"Even if they don't have the strength or agility they had before, they impose on you one-on-one.

"Buffon always anticipates. After more than 20 years as a professional, he knows the movements and thoughts of the forwards."

Another former team-mate Morata praised was Giorgio Chiellini, the star Juve centre-back who will miss Italy's clashes with Spain and Israel due to injury.

Morata described just how difficult it was to get the better of the 33-year-old defender.

"It's like you're being put in a cage with a gorilla and you have to steal his food," he said.

"I think that the few times I have scored against him have been inside the area. It is impossible to win a one-on-one with Chiellini, or he's holding you."