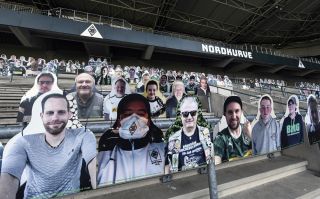 The German Bundesliga is set to start again on May 16.

Plans for the top two tiers of German football to restart were approved by the federal government on Wednesday, making the Bundesliga the first of Europe’s ‘Big Five’ leagues to be given the green light after competitions across the continent were suspended due to the coronavirus pandemic.

The 36 clubs gathered via conference call on Thursday to formalise the fixture schedule, and it has been decided that matches will begin from May 16, restarting from matchday 26 and playing through to a final round of matches on the weekend of June 27 and 28.

All the matches will be played behind closed doors.

Among the highlights of the first round upon the league’s resumption is the Ruhr derby between Borussia Dortmund and Schalke. Reigning champions Bayern Munich resume their quest to retain their title against Union Berlin on Sunday, May 17.

Regular and widespread testing has been a key cornerstone of Germany’s handling of the crisis from the beginning, and of the German Football League (DFL)’s strategy to restart.

It announced on Friday that the second wave of tests had been completed. Out of 1,695 conducted on staff connected to the 36 clubs, only two had come back positive. The DFL said those individuals’ cases were reported immediately to the local health authorities.

“It is great news that the German authorities have agreed that the Bundesliga can return,” he said.

“This is a huge and positive step to bringing optimism back to people’s lives. It is the result of constructive dialogue and careful planning between the football authorities and politicians and I am confident that Germany will provide a shining example to all of us in how to bring football – with all its excitement, emotion and unpredictability- back into our lives.

“I wish everyone connected with this every success.”

Italian clubs are also taking tentative steps towards a resumption of competition, in a country which has suffered badly from the Covid-19 outbreak.

Roma’s chief global sporting officer Manolo Zubiria set out the strict protocols being put in place at the club’s Trigoria training base in an interview with the club’s official website.

He said individuals entering the complex will have their temperature and oxygen levels measured. If on a second reading an individual’s temperature is above 37.5 degrees, they will be immediately sent home and monitored from a distance by medical staff.

Players will train in groups no bigger than four, Zubiria said, and have been told to keep at least 10 metres apart at all times. They will be expected to wear face masks right up until the start of the session, change in individual changing rooms and seal up their own training kit. Communal spaces at the training ground such as the cafe will not be in use.

🩺 Medical testing at the entrance🚹 Individual rooms for changing📏 Players kept apart at all times— AS Roma English (@ASRomaEN) May 7, 2020

A statement on the club’s official website read: “Following the laboratory checks carried out yesterday afternoon, Fiorentina have identified three athletes and three members of staff who are positive for Covid-19.”

All six people gave been isolated and the rest of the group can return to training on Friday.

Sampdoria announced later on Thursday that four of their players tested positive for coronavirus, with three new cases and one “return to positivity”.

A short statement on the club website read: “UC Sampdoria inform that during the tests performed on the players, results emerged that showed three new positive cases for Coronavirus-COVID-19 and one return to positivity.

“Currently asymptomatic, they have been placed in quarantine and will be constantly monitored, as per protocol.”

Meanwhile, the Dutch health minister has warned spectators may not be able to return to watch sporting events in his country “for a year or more”, until a vaccine is found.

Professional sport even behind closed doors in Holland has been prohibited until September 1 at the earliest, which has already led to the top-flight Eredivisie football competition being forced to end prematurely.

Dutch website voetbalprimeur.nl quoted a letter from health minister Hugo de Jonge to the nation’s parliament which read: “We cannot yet mention a date for the last step, the mass gatherings.

“That is actually only possible if there is a vaccine and no one knows how long it will take. We hope of course soon, but a year or more is very real.”