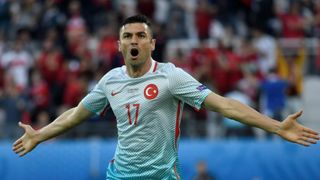 Burak Yilmaz struggled badly with injuries during 2015-16, but feels his opener for Turkey against Czech Republic at Euro 2016 was just rewards for his hard work.

The 30-year-old's season was ruined by a persistent thigh problem, although he managed to return in time to be a part of Fatih Terim's squad for the finals.

It looked a bleak picture for Turkey heading into their final Group D fixture in Lens, without a goal or point to their name and staring elimination in the face.

But goals from Burak and Ozan Tufan earned a 2-0 success and the possibility of reaching the last 16 as one of the best-ranked third-placed sides.

"This is my first major tournament. I'm very happy, I scored an important goal in a decisive game, and everything worked well," Burak said.

"It's been a good night. This year has been really difficult for me. I've had many injuries, big injuries, and I've been preparing myself in China for three months with two physios.

"It's been demanding. Thanks to God, I got what I deserved. I hope we advance."

Burak also had words of praise for 18-year-old Emre Mor, who assisted him for his opener in the 10th minute.

"He's a very interesting player. When he first joined us, I didn't know him, but when I saw him training I saw that he's a gifted player.

"He's really valuable to us, to Turkish football. I hope he'll have a very bright future. He's signed for a giant club [Borussia Dortmund] and I hope he will improve."