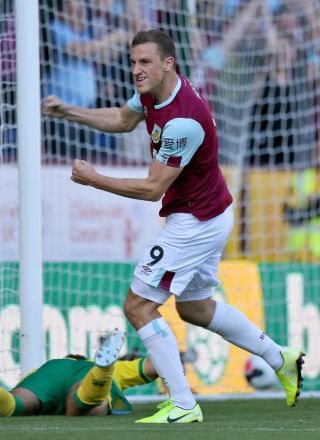 Sean Dyche praised Chris Wood after he broke his scoring duck for the season with two goals against Norwich.

The New Zealander has been overshadowed by strike partner Ashley Barnes’ excellent start to the campaign but struck twice in the first 14 minutes in a 2-0 victory at Turf Moor.

Burnley boss Dyche said: “He’s been working diligently and Barnesy’s been getting the praise – rightly so, for his performances and his goals. I’m pleased for Woody because he’s stuck at it and he gets two really good goals.”

A week after beating Manchester City, this was something of a Premier League reality check for Norwich, who had a handful of chances but could not apply consistent pressure to Burnley.

“They’d had a brilliant result last week quite obviously and we know they can play, they’ve got a tempo to their game and I thought we thwarted all of that with our early pressing, our early endeavour,” said Dyche.

“I thought we did that to Brighton last week for the first 30 minutes but the difference is we scored and that obviously puts them on the back foot further and then we scored the second and it’s a long way back for them. I was pleased with everything. I thought we were super strong today.”

The result brought Burnley a first win since the opening day of the season and saw them climb into the top 10, for 24 hours at least.

Dyche’s only gripes were two decisions by referee David Coote, first in turning down a penalty appeal when Barnes appeared to be felled by Ben Godfrey and then not showing a second yellow card to Ibrahim Amadou for a crude foul on Jay Rodriguez.

“I’m a big fan of VAR but I don’t know where it lives if that’s not a penalty,” said Dyche. “And when I see people rolling all over the floor every week and their lad’s battered Dwight (McNeil) and then battered Jay Rod and doesn’t get a second yellow. Another day that might affect the game.”

Norwich boss Daniel Farke felt a slow start to the match had been the difference between the sides.

“We had the first big chance in the game and (Nick) Pope made a, I would say, world-class save. It would have been a completely different game but my feeling is we didn’t start proactive enough so were always a bit slow and not really convinced to play our style.”

Farke saw his lengthy injury list added to as captain Alex Tettey limped off after only 12 minutes with an apparent thigh strain while goalkeeper Tim Krul made it through the game but was not fully fit.

The Canaries boss did not use that as an excuse and dismissed suggestions there may have been a hangover from last weekend’s result.

“Not at all because we are modest enough and down to earth enough that we know this game against Man City has nothing to do with the game today,” he said.

“We were exactly prepared for what would happen today. I didn’t underestimate this game and I knew we have to be from the first second to the last second at our best in order to be ready to be win some points and sadly our first 15 minutes were not good enough.”