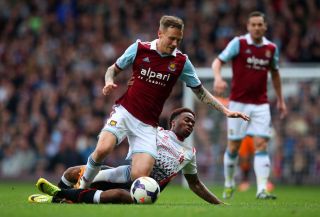 The versatile Taylor, who can operate in midfield and at full-back, moves to Turf Moor on a two-year deal after his contract with West Ham expired.

Striker Sordell has signed on a three-year contract and will boost a forward line that already features Danny Ings and Sam Vokes, who combined for 40 goals in the Championship last season.

The 23-year-old spent last season on loan at Charlton Athletic, and will need to improve on the tally he reached for the south London club, for whom he scored eight goals.

Burnley have now made three signings in the close-season as they prepare for a return to the top flight, with Taylor and Sordell's arrivals coming after that of goalkeeper Matt Gilks earlier in the week.