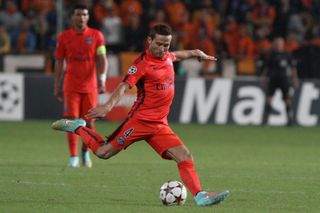 Cabaye, who joined PSG from Newcastle United in January, has found first-team opportunities limited at the Parc des Princes, leading to speculation that he could leave the defending Ligue 1 champions in the January transfer window.

Wednesday's encounter at the Stade Francois Coty marked just the eighth time that Cabaye has started for the capital club this season, and the France international understandably welcomed the time on the field in a victory that saw PSG come from behind to progress to the last eight with three second-half goals.

"The main thing is to have achieved qualification for the next round," Cabaye told PSG's official website. "The goal is to go all the way in this competition.

"For me, it feels good to play a whole game to benefit from the game time."

Forward Jean-Christophe Bahebeck made his return from a groin injury in Corsica as a second-half substitute and was highly influential, setting up Serge Aurier for PSG's second before rounding off the victory with a goal of his own seven minutes from time.

"Individually it was a good evening," Bahebeck said. "I was out of action for a little more than two weeks and tonight I've made a decisive pass before scoring. I am so pleased with this return."