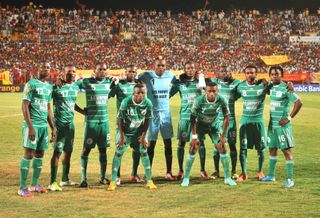 The Congolese champions needed a point from their final game in Group A to make the last four and they duly delivered with a comfortable victory over their Ivorian opponents.

Leopards' progress to the last four means all teams left in the competition began the season in the CAF Champions League before dropping down to the Confederation Cup in April.

Their day started nervily, though, as ASEC took the lead after 40 minutes through Krizo Yao.

However, Leopards responded well, scoring three goals in the space of five minutes straddling half-time before then adding a fourth.

That result was enough to give Leopards top spot in the pool as previous group leaders Cotonsport could only draw 1-1 at Real Bamako.

Ali Badra Sylla gave the Malian side the lead in the 43rd minute but they were denied all three points as 10-man Cotonsport levelled in the third minute of stoppage time through Jean Joseph Kombous.

Leopards will now face Sewe Sport in the semi-finals, while Cotonsport will meet Al Ahly over two legs next month.