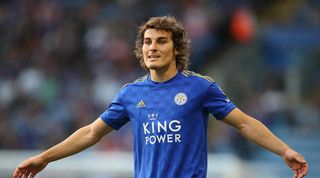 Manchester City are weighing up a move for Leicester centre-back Caglar Soyuncu, according to reports.

Pep Guardiola has been forced to field midfielder Fernandinho in the heart of his defence in recent matches after Aymeric Laporte and John Stones were ruled out of action by injury.

Laporte suffered a knee injury in the 4-0 victory over Brighton last month and is expected to be sidelined until January at the earliest.

Stones will return to the team before then as he continues his recovery from a muscle problem, but the England international may still be forced to spend another month on the treatment table.

Vincent Kompany left the Etihad Stadium to take up a player-manager role at Anderlecht this summer, and City decided against signing a replacement.

That always left them vulnerable at centre-back and Guardiola could rectify the issue by making a move for Soyuncu in January.

The City boss recently declared that the club do not have the money to make any new signings in the mid-season market.

However, Turkish publication Fotospor write that the Premier League champions have been impressed by the Leicester man’s performances so far this season.

Soyuncu was restricted to just six Premier League appearances last term, but he has become a regular starter in 2019/20 following the summer sale of Harry Maguire to Manchester United.

City were also linked with Maguire but ultimately chose not to make an offer because they felt the former Hull stopper was too expensive at £80m.

Guardiola could return to the King Power Stadium in an attempt to acquire Soyuncu, although City are aware that Leicester will be loath to lose one of their key players in the middle of the campaign.

Guardiola’s side beat Everton 3-1 on Saturday to remain five points behind of Premier League leaders Liverpool.